Scarbantia is situated in pannonia superior, at the position of today’s Sopron (Hungary). The Romans had conquered this formerly celtic territory by 9 b.c., and turned it into a province towards the end of the century after the locals staged a failed-uprising. Emperor Tiberius founded the town  located at the amber road. The amber road starts at the Baltic Sea, crosses the Danube at Carnuntum (Petronell, Lower Austria) and leads around the alps to Aquilea (Grado, Italy) by the Adriatic Sea. 50 years later Domitian pronounced it municipium flavium (a city). Scarbantia grew bigger and some significant buildings were erceted, however, no city wall was built.

The long era of peace during the imperium in 2nd century a.d. and the beginning of 3rd century a.d.and also a constant rise in wages for the legionnairs deployed at the limes (a fortified frontier) brought economic advancement to pannonia and other borderlands. As a consequence the wealth gap between the Roman regions and their Germanic neighbours north oft he danube  grew wider and covetousness arose across the borders. The limes (located about one day march from Scarbantia) guarded the Roman empire against its enemies but it also shielded the constant progress of a life-threatening developement across the border from the Roman eyes. The proceedings in the Germanic homelands  beyond Danube and Rhine were only of little interest to the empire as there was hardly anything of value which would have been worth the trouble of getting it. Everybody was happy not to have to deal with the unrefined savages anymore.

In the barbaricum, however, big progress was made  – not least because of the Roman help. The warriors who had served in the Roman army returned to their homelands and passed on their knowledge conecerning weapons and military strategy to their native peole. Those warriors also brought unprecedented wealth (wages, pay for goods, presents and loot) to the Germanic territories. The newly gained prosperity further fueled the Germanics‘ cravings for more and more Roman goods

1 b. c.
Celtic (Illyrian) tribes in Pannonia are called thieves and  raiders by Roman writers.

12-9 b. c.
Future emperor Tiberius subjugates the tribes of Pannonia through war..

6-9 b. c.
With difficulty Tiberius puts down the pannonic rebellion. A province governed by the miliary is established.

about 50 a. d.
The amber road is extended through Pannonia due North to the Danube limes (Carnuntum) and further on to the Baltic Sea. A time of econimic boom starts for the newely founded cities in this area, among others for Scarbantia.

2nd half of the 1st century a. d.
Emperor Domitian declares Scarbantia Municipium (Roman municpality). Danube limes is throughout fortified after severel defeats by the Iazyges.

103 a. d.
Pannonia is seperated in pannonia superior and pannonia inferior. Scarbantia is situated in the first one.

171 a. d.
During the Marcomanni wars all oft he pannonian borderlands and Scarbanta get devastated. .

205 a. d.
Cassius Dio calls the in the meanwhile completely romanised Pannonians brave, yet irascible It’s a time of economic prosperity.

212 a. d.
Caracalla pronounces all inhabitants of the Roman empire citizen with all acompanying rights of citizenship.

From this year on the limes became a taken-for-grantedness of the Roman empire, a vigorous symbol of  solid borderr. It showed how strange and uncanny the lands those lands beyond the border had become tot he Romans. People living on this side oft he border were Romans, on the other side there were only barbarians.

During the Marcomanni wars (166-180 a. d..) the part oft he limes by the middle and lower Danube proved especially threatened. Passing-by Marcomannis (a Germanic tribe) inflicted great losses upon Scarbantia sounded the bell for its downfall. The arrvial of the goths (another Germanic tribe) at the outskirts oft he Roman empire reinforced the danger to Scarbantia. On top of that a new dynasty, the persisan Sassanides, staged a coup in the empire of the Parthians (Iran) in 224 a. d. and rose to power. The new emperors soon claimed ownership of most of the Eastern Roman provinces which provoced warrs with huge losses. The strictly organised empire of the Sassanides was militarillyequal to the Roman empire on most issues and followed an aggressive political course concerning the west. In 231 a. d. Persian armies overran the Roman garrisons in Mesopotamia (Iraq) for the first time and advanced  temporarily as fas as Kappadokia (Turkey) . As a consequence the Roman Empire had to withdraw most of its soldiers from the Northern border regions in order to fight back the continuously advancing Persians in the East which was of course noticed by the Germanics. The almost unguarded borders in Germania, Raetia (Switzerland) and Dakia (Romania) became a target of  the barbaric tribes living in these areas.  When the Alemanni crossed the Limes at the upper Rhine and at the Danube in 233 a. d. the upper germanic raetic regions were open for looting – only slightly guarded or even empty forts werde left. Also at other sites along the limes conflicts escalated: Samates,  Goths, Carps and Gepidae threatened the lower Danube regions (Hungary, Romania).

Dealing with three trouble spots, which where above all far away from each other, overcharged the military possibilities oft he Roman armies. The catastrothe of 233 a. d. hit the people oft he provinces without warning. Emperor Severus Alexander had to cancel the campaign against the Persians at very unfavourable conditions (Rome had to pay tribute to the Persian King Schapur I.) and quickly marched back to the North with his armies.He did want to start another expensive war and therefore did not attack the Allemanni but started negotiations. In order to establish law and order once more the Roman Emperor planned paying the allied Alemanni leaders which enraged his soldiers. Many oft hem came from the forts by the Rhine and the Danube and craved for vengeance. In 235 a. d. the enraged soldiers killed murdered emperor (the last emperor of the Severus dynasty) and pronounced a high officer, Maximus Thrax (the Thracian) the new Roman Emperor. This Murder was the beginning of  the sinister era of the Barracks Emperors which brought almost 50 years of anarchy and chaos to the Roman Empire. 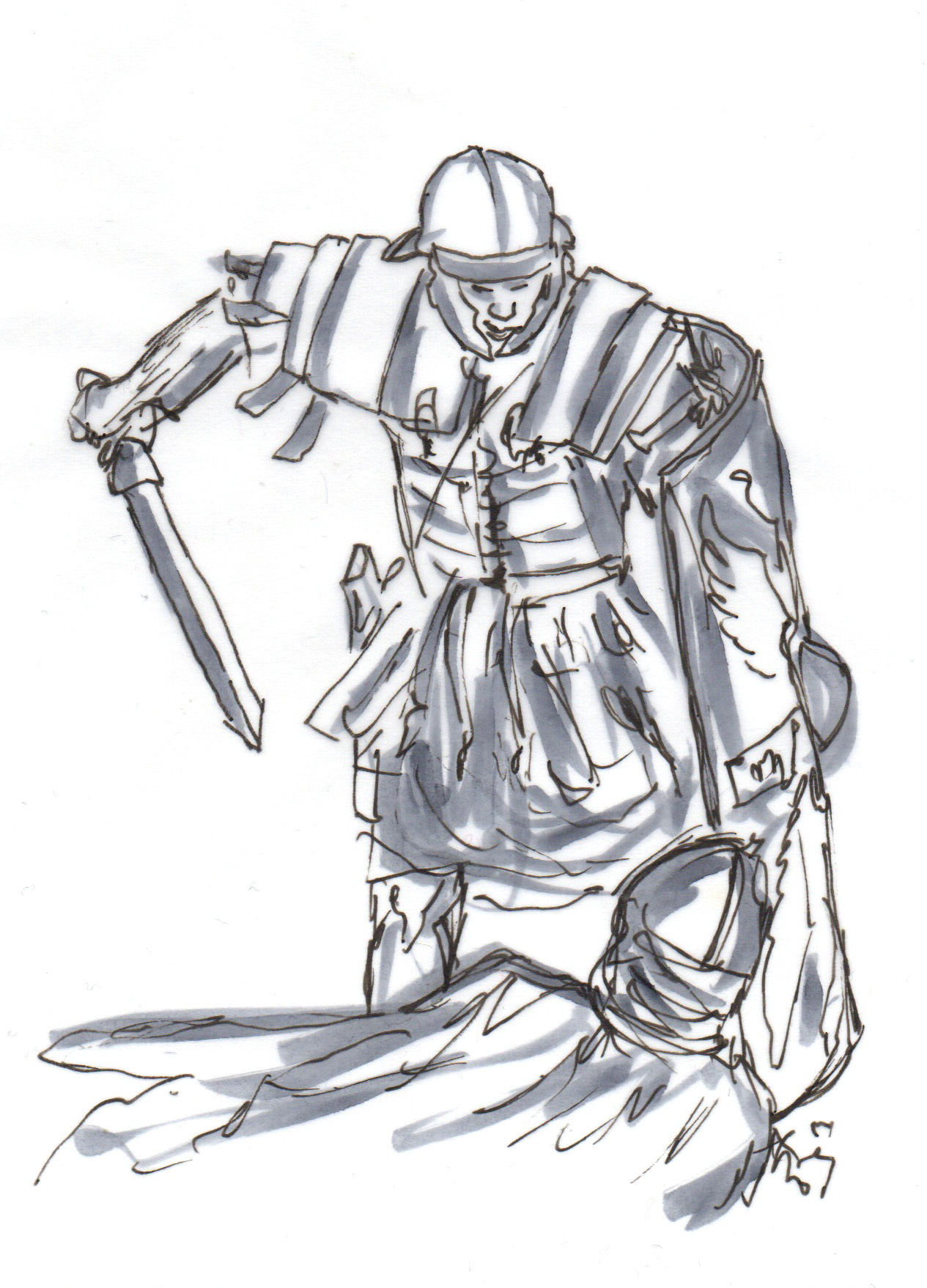 235 a. d.
The legions in Mainz declare Maximinus Thrax first barracks emperor. Start of the crisis oft he Roman Empire.

244 a. d.
Gordian III dies in battle against the Sassanides. The new emperor Philippus Arabs ends the war and has to pay tribute to the Persians but calls this peace his victory.

Energetic and  vigorous Maximus Thrax was able to stabilize the Rhine Limes but the Roman Empire was seething on the inside. Parts of the army revolted and put new emperors on the throne with incresing frequemcy. Most of the time soldiers were driven by fear of earning too little or fo being left behind and they called for an emperor closer to them. Especially in the camps by the Danube and the Rhine and in the East – where the danger of another war was the greatest – soldiers assigned their own heir tot he throne. However, all those barracks emperors could hardly cope with the problems they were facing. Their own soldiers lost more and more discipline and when they were even slightly dissatisfied they had no scruples to degrade their emperors, mostly by murdering them. Another huge threat were the usurpers supported by other legions who had to be batteled constantely. Last but not least vigilant barbariens from across the limes were eager to make use of any inner-roman contentions and cornered the barracks emperors by by raiding roman lands. The major crisis oft he Roman Empire was composed of uncertainty, decampment of the financially powerful soldiers, barabrian raids, inflation because of new coins with less metallic content, civil wars, decrease of population and so on. Especially in Scarbantia a decline in economic and living standard was the result.

In 238 a. d. the roman senat had to legitimize six emperors in a row. Gordian III (Gordian I & II were slain in the year oft he six emperors) died in battle against the Sasanides or was murdered by his successor Philippus Arabs. In these times of crisrs more and more people turned their backs on the old gods and  devoted themselves to the Cristian god and his promise of redemption. This averting of the official cult also meant no more sacrificing for the emperors and hence enrging the gods guarding the empire.Therefore christians became the perfect scapegoats and were regarded as corrosive force and threat for the Roman Empire. There were no famines, wars and catastrophies without voices being raised to throw the crhistians to the  lions.

In 248 a. d. the emperor put senator Decius in charge of the legions at the Danube limes in order to repel the Gothic incursion in Moesia. He succeeded but at that his legions declared Decius empereror. Decius, the usurper, marched to Italy with his army fort he purpose of challenging Phillippus Arabs. As a matter of consequence he left the limes unguarded against the impending invasion oft he Goths under king Kniva.

In 248 a. d. (1001 ab urbe condita, after foundation of the city) Rome celebrated its 1000th anniversary but was also engulfed in a major crisis and was on the brink of beind torn apart between its mutinying generals, religious strains and its saber-rattling enemies.

It is the year 249 a. d., 1002 a.u.c., the year oft he consulship of L. Fulvius Gavius Numisius Aemilianus and L. Naevius Aquilinus and the fifth year of reign of emperor Philippus Arabs.

249 a. d.
General Decius eposes the Pannonian limes and marches with hs legions to Italy in order to challenge emperor Philippus Arbs near Verona and to accede the Roman throne as usurpe. The Germanic tribe oft he Goths under king Kniva is already waiting for their chance at the unguarded border, armed to their teeth.